March 31, 2021
The central person in this blog is our 2nd great-grandmother, Jane Feeney.  When we commenced in early 2017, we were focussing on Jane, her husbands - John Killion, Thomas Seward and Charles Moran - and their children and descendants.  After a DNA breakthrough later in the year, we reunited Jane with her mother, Jane, and four siblings - Eliza, Ann, Edward and Thomas - and the scope of the blog expanded. Are you a Killion, Seward or Feeney descendant?  If so, why not join our blog to share information and find out more about our families. John Killion arrived in Sydney on 19 January 1834 .  He was transported from County Westmeath, Ireland.  John received his ticket of leave on 10 July 1848.  On 29 September 1851, he married Jane Feeney in what is now the Port Macquarie Historic Museum. John and Jane had five children before John's death on 21 July 1864.   Jane arrived in Sydney on 4 April 1849.  She left the South Dublin Work House for her new life as part of the Earl Grey Famine
Read more

Reuniting photographs in the digital age.... 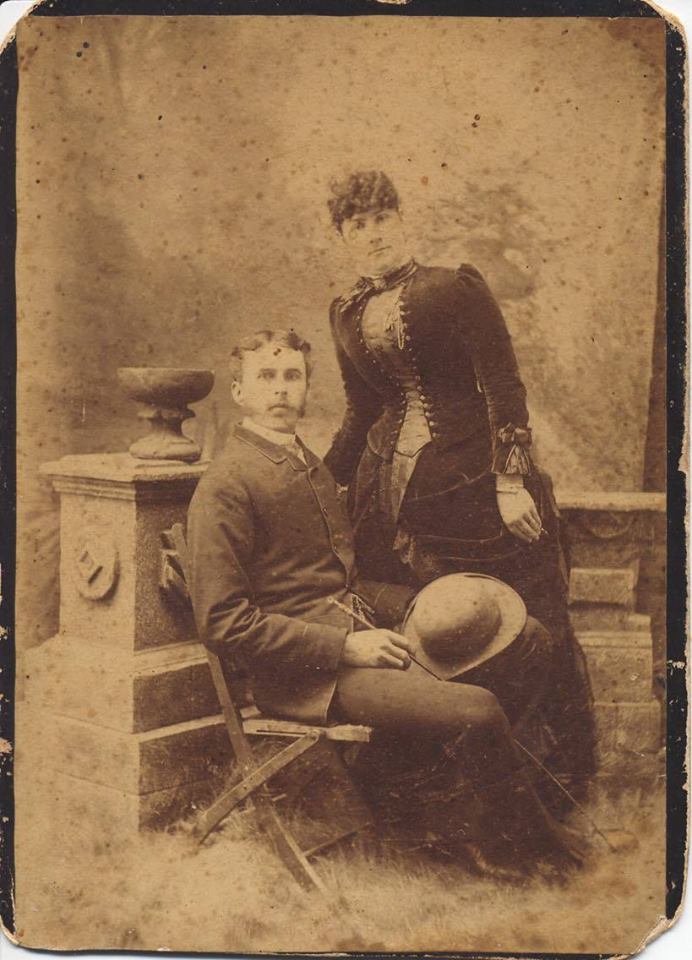 Family history reunites extended family to share their stories and, if we're lucky, old photographs. Sharing is so much easier with digital images. Multiple copies can be distributed electronically anywhere in the world without the cost of duplicating or the need for the custodian to part with their treasures.  The top digital image was shared with me by my Killion third cousin who'd received it from his Killion second cousin once removed, my third cousin once removed. It's among a group of unidentified photos thought to be Killion family in the possession of cousin Helen. When I shared digital images of photos in my possession, the connection was made with the second image which is a  "carte de visite"  of my great-grandfather, Francis (Frank) Gersbach. So we started looking more closely. Frank married Margaret Killion on 26 May 1885 at the Catholic Church in Kempsey. Frank was twenty four and Margaret was twenty three when they married. We thought that their pos
Read more 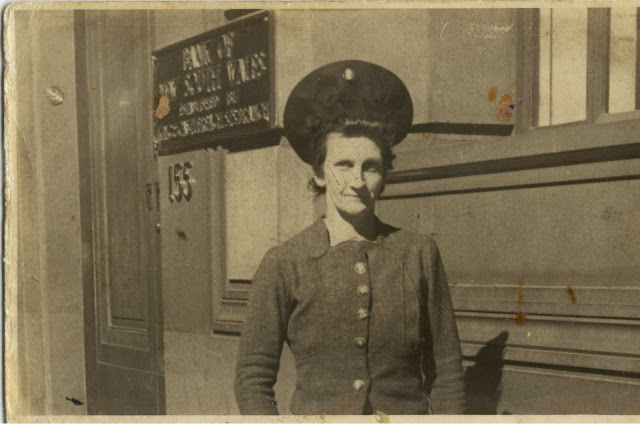 Amy Halliday (nee Killion) was born on this day 125 years ago - 2 February 1897 at Smithtown, NSW. Amy married Herbert Halliday in 1922 in Sydney. They had five children. Amy died in 1949 in Marrickville. Amy was my grandmother's first cousin. Being such a big family, I often wonder what contact the cousins had. What I do know is that Amy's granddaughter, Helen, has this photo in her collection as well as a photo of my great-grandparents, Margaret Killion and Francis Gersbach, inscribed "Aunty Maggie and Uncle Frank". While the photo was taken about 1885, the years evaporate when see you read those inscriptions. So it makes me wonder about this photo. Was it a photo taken by a street photographer, perhaps during the war? Where was it taken? We have a clue as it was in front of a Bank of New South Wales and the street number was 155. Is there an inscription? This photo was shared on Ancestry.com by Amy's great-granddaughter.
Read more 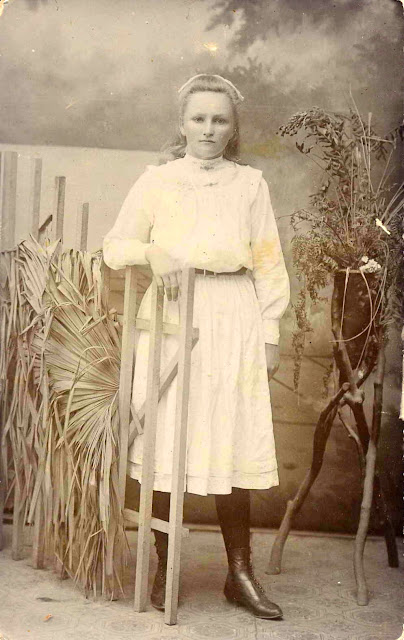 Ida Killion is the daughter of Thomas Killion and Mary Jane Wood and granddaughter of John Killion and Jane Feeney. She was born in Smithtown on the Macleay River on 16 July 1893; the fifth of Thomas and Mary Jane's nine children.  Her parents moved to Sydney with their younger children between 1913 and the time of Thomas's death on 19 December 1917. They were living at 10 Church Street Paddington when Thomas died.  Ida has two entrees in the 1930 Electoral Roll. One is at 3 Hopewell Ave, East Sydney with her  mother and brother Albert. Her older sister, Annie Lyons was also living there with her three children, Doris, Monica and Kathleen. Annie  moved to Sydney after the death of her husband, Absolom, in 1923 and their son, Absolom, in 1921. The other shows Ida living at 48 Jersey Road Woollahra and working as a postal assistant.  The photo at the right has been taken from ancestry.com. It's held in the collection of Ida's great niece. On this day eighty years ago, Ida
Read more 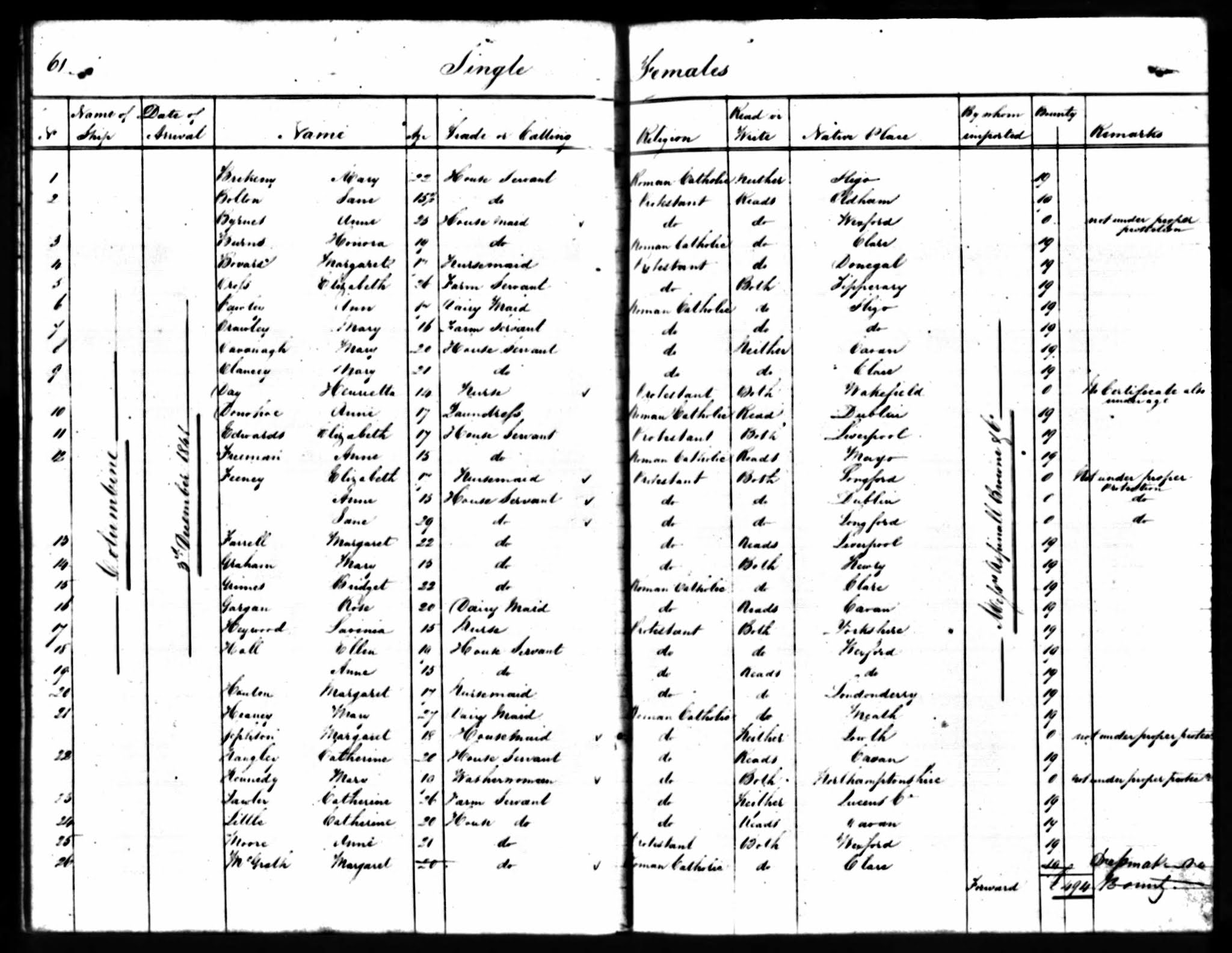 Today's one hundred and eighty years since the arrival in Sydney of our many times great-grandmother, Jane Feeney (nee Baker or Bourke), and her older daughters, Eliza and Ann, on board the Columbine.   They where three of the two hundred and sixty three "bounty immigrant" who'd left Liverpool, England on 20 August 1841.  The bounty reward scheme ran from 1835 to 1841. Immigrants were selected by colonists who paid their passage. When the immigrant arrived, the same or another colonist would employ them. Colonist were then reimbursed by the government for all or part of the cost of the passage.  Jane and her girls were bought out by Messrs Aspinall, Brown and Company who it appear were heavily involved in bringing immigrants to New South Wales. Their immigration records are attached but the task remains to transcribe their details and find out more about their lives and employment in Sydney. The three are shown as "unmarried female immigrants" but Jane was a
Read more 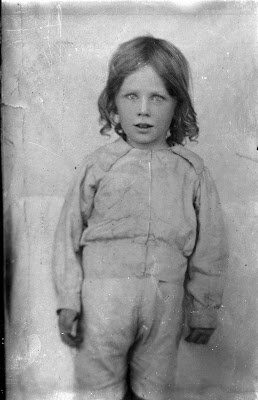 Absalom Lyons (1912 to 1921) This old, crumpled photo is one that stays with you when the story's attached. While I've seen a number of copies, this copy comes from  MyHeritage . It's been shared by a member of the Lyons family. Absolom is the great-grandson of John Killion and Jane Feeney. He was born on 27 June 1912. He's the second child and only son of Absolom Lyons and Annie Killion. Annie was the daughter of John and Jane's son, Thomas. Absolom Lyons, 28, and Annie Killion, 23,  married in 1910 in Sydney.  Their first child's birth was registered in Sydney and the other three in Kempsey- Doris Marion - 6 November 1910 to 27 June 1996, Absolom - 27 June 1912 to 26 October 1921, Monica Mary - 14 February 1914 to 23 December 1977 and Kathleen Clare - 13 November 1918 to 20 October 2009. Young Absolom looks so angelic. He's about two years of age. The family had settled back on the Macleay by this time. The 1913 NSW Electoral Roll shows them living on the
Read more 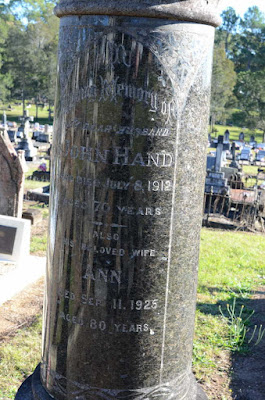 John Hand was born on 14 July 1871 at Deepwater Creek on the Macleay River.  He was the oldest child of John Hand and Ann Kenny, two Irish migrants.   Father John had arrived in 1863 on the Sir John Moore as a 20 year old single man.  He records a cousin, Margaret McGough, was already in the colony.  Ann was on the same ship with her widowed mother, Catherine,  and three younger siblings.  Ann was 18.  Catherine's two orders children, Bridget and Margaret were already in New South Wales.   Both John and Ann settled on the Macleay.  On 26 April 1865, Ann married Frederick Honholz (or Hohnholy) who had migrated from Germany.  Their son Henry Frederick was born on 17 April 1866 at Deepwater Creek.  On 5 September in the same year, Frederick died in Sussex Street, Sydney.   On 29 March 1869, John and Ann married at the Catholic Church in West Kempsey.  After John was born in 1871, 7 other children were born to the couple.   John married Annie Seward on 1 March 1905 at the same church.
Read more

It's just over 171 years since the death of our many time grandaunt, Ann Wilkinson (nee Feeney). You can read about Ann  HERE.   Ann died on 4 August 1850 at her mother's home in Clarence Street Sydney.  That was just nineteen months after her marriage to Richard Wilkinson. Last year, we didn't know anything about Richard or his fate after Ann's death. The only detail was in the Camperdown Cemetery Internment Register which records Ann as "wife of a Mariner". Could we have a lead on Richard Wilkinson? While it's early days, we might have a breakthrough thanks to Olivia, a young New Zealander, who's been busily researching her 3rd great-grandfather, Richard Wilkinson. Richard married Susannah Craib on 11 October 1860 in the Bay of Islands, New Zealand. As his marital status was shown as widower, Olivia has been searching from his previous marriage in New Zealand. However, after finding Ann Feeney's marriage to Richard Wilkinson on my  ancestry.com.a
Read more
More posts